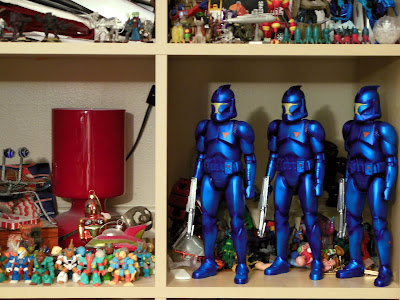 Orbit Zenith Man is an homage to one of the most sought-after Star Wars toy bootlegs of all time, the infamous Turkish Uzay Blue Stars.

Why Hasbro hasn't done their own homage, I don't know.  Why Hasbro hasn't simply churned out oddly-colored Clones and Stormtroopers, I don't know either.  I'd buy tons!  But, they did the DIY crowd a huge favor by releasing 12" limited articulation clone troopers.  A neat, durable toy for kids, and a fun plaything for painters!

Of course I intended the first run of Orbit Zenith Men to be solid blue, with a white weapon, but being the amazing planner that I am, I ran out solid blue.  Hence, Edition One is all metallic colors, since I have plenty of those.  I'll do a more traditional solid scheme next if these sell through.

The metallic looks incredible though, I can't help but gawk at them on my shelf.

Everything is still on track for release tomorrow!
Posted by Seth at 10:28 AM