Rust Bucket: Up for Grabs! 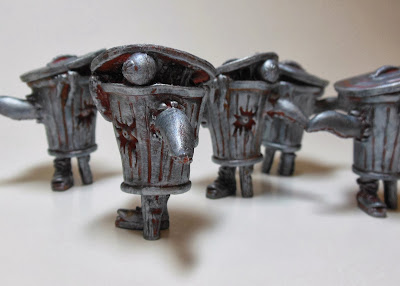 Five awesome custom Rust Bucket Tencans are now on sale in the shop: http://orbitdyne.blogspot.com/p/shop.html
Head over and buy one, wont you? Thank you!
Posted by Seth at 1:02 PM No comments: 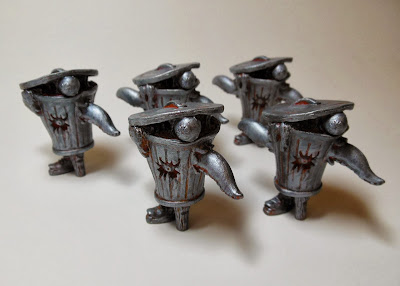 I talked Nikolos Sardos into letting me paint some of his new creation, Tencan!  The adorable little mutant trashpile is part of Outlandish Mini Figure Guys Series 3.  If you're new to them, do check them out.  A whole line of community-created plastic figures, in the spirit of MUSCLEs and Monster in My Pocket.

I wanted to do something special for this figure, and what would be better than rusty cans?  Nothing!  To get the effect I wanted, I headed for the Monster Kolor.  But instead of a usual start-to-end airbrush job, I did something I haven't done in years: Drybrushing!

First, a nice multi-colored basecoat of metallic and flat oranges and reds: 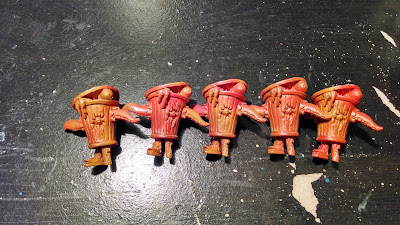 Then to the brushing!  I added several layers of metallic silvers, going from dark to light with a big paintbrush: 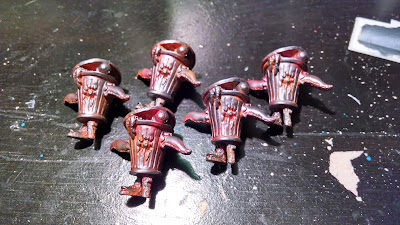 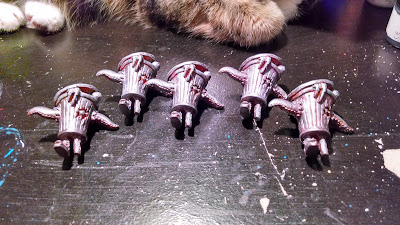 THe silver drybrushing only hit the high spots, leaving nice rusty details in all the concave areas, and really brining out the charm of the sculpt.  I topped them off with a tiny bit of iridescent blue, and they're good to go!

I did a run of five, each one slightly different.  Signed and numbered, with a matching card.

They will go up for sale here, Saturday at 1:00 Pacific.  Limit one each, $12 shipped.  Oogle more pictures after the break: